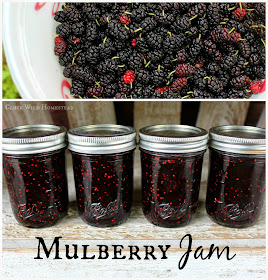 I need to get a move on things. I realized this morning that by this time last year, my canning adventures were well under way. I had already canned Blueberry Muffin Jam, Strawberry Jam, Strawberry Black Pepper Jam, Strawberry Mint Black Pepper Jam, and Peach Jam. I've pretty much had blinders on the last couple of weeks as we've been finishing up various projects here on the farm. We moved and expanded the goat yard (putting up fencing is really hard work in case anyone was wondering), converting one of our two barn overhangs into the new chicken coop, and gutting the old chicken coop to serve as the new goat house. It may not sound like much, but with just the two of us to do the work, my husband and I have been working our tails off. We had to get everything done by last Saturday night, as we were picking up three new dairy goats bright and early Sunday morning. I am SO pleased with these three new goats. They come from excellent milk lines, are stand trained (they're ever so patient with my newby milk maid hands), and well mannered. They are incredibly sweet, and snuggly. 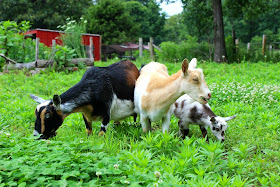 Two of the new goats just freshened and are giving a quart to a quart and a half a day, and the third is a two month old doeling. We've never such a young doeling before, and I'm about to die of all the cute. 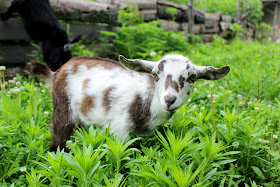 Two weeks ago, we drove two hours to pick up a goat in milk that we found on craigslist. We didn't find out until we got there that she had been running with several bucks, and may or may not be pregnant. Against my better judgement (and not wanting to waste such a long time on the road), we brought her home. She was almost impossible to milk. We didn't have a milk stand at the time (obviously a huge mistake that I'm laughing at myself for), and she wasn't familiar with the whole milking process (contrary to what we had been told by the previous owners, grrr). She kicked, and screamed, and kicked some more. After half an hour of struggling with her, we finally got about half a cup of milk out of her. Sigh. The milk was okay, but had a bit of a goaty taste to it. I can eat or drink just about anything, especially if its something I've worked so hard to obtain, so you better believe I used it!

Until we brought these girls home yesterday, I thought that was just how goat milk tasted; okay, but not up to snuff with cow milk. It turns out that goat milk sans buck scent is seriously incredible. I just polished off a pint of the stuff while writing this post. It's sweet, creamy heaven in a glass. 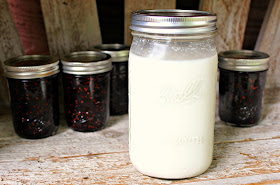 This morning as I was letting the chickens out of their new coop to free range around the farm, I looked over to see one of our many mulberry trees loaded with black, shiny berries. Oh my word. I grabbed a bucket, and began picking. While I was picking, the chickens discovered I had picked an entire bowlful of mulberries 'just for them'. 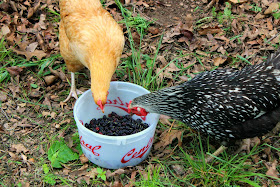 I picked what I could reach, then laid down an old king sized sheet underneath the tree, and shook the branches like a mad woman! Good thing I don't have any neighbors... it looked a little like I was humping the air, and hanging onto the branches for balance. 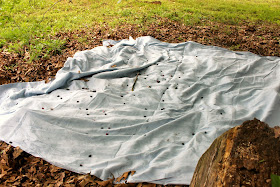 The ducks got wind that there were mulberries to be had, and left their beloved pond to come get some. 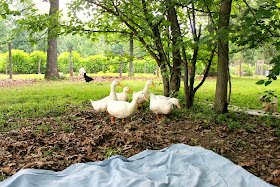 Otis was very impressed with my harvest. He's pretty much the best cat ever. 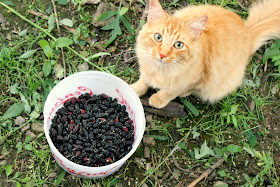 I ended up with five and a half cups of delicious berries destined for jam. 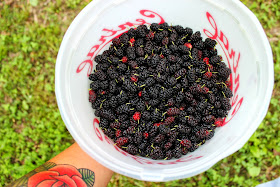 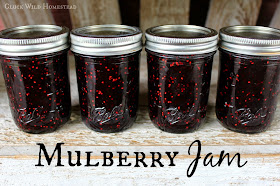 This recipe was adapted from the Ball Book of Home Preserving.